Blackline Simulations hosted Exercise SHRIKE as a surveillance and fieldcraft exercise designed to allow participants to practice their skills in observation and hide construction. This was a 24-hour live-fire exercise held near Guelph, Ontario with a minimum of enemy forces to test the effectiveness of participants’ work.

Callsigns HANDBRAKE and MAINLINE will conduct a training exercise to create an OP and record details of all rail traffic in the vicinity of grid 6810 2960 no later than 1800h 21JAN17 in order to collect information about ongoing enemy resupply efforts.

HANDBRAKE and MAINLINE arrived to the FOB prior to 1000h 21JAN17, and the briefing commenced at 1007h. Units were provided with an overview of the AO, METREP, enemy situation, and objectives through an update to the WARNORD. Aside from a shift in weather patterns that included possible precipitation and advisory about thick fog, the orders remained the same.

Command broke down the units to conduct a detailed planning session that saw individuals work through a series of contingency plans, route planning, and actions on the objective. The plans generated by HANDBRAKE and MAINLINE established an infiltration route that took them through three possible OP sites, with the intent of halting at each one to conduct a search for suitable hide locations. They also designated two separate Exfiltration rally points, the use of which would depend on proximity to the final hide site.

Also highlighted were a set of mission abort criteria. Several were based on real-world scenarios such as injuries requiring medical attention, and other simulation-based criteria such as critical casualties or a compromise of the hide. HANDBRAKE would take the lead of the unit including navigation and danger area crossings, while MAINLINE would conduct the majority of the hide reconnaissance searches.

HANDBRAKE and MAINLINE step off from the infiltration point at 17T NJ 6767 2965. Visibility is compromised due to increased fog and is limited to approximately 400m.

Units arrive at Waypoint 02; their first major obstacle and entry into the AO. MAINLINE establishes security while HANDBRAKE 04 and 03 cross the rail line and investigate the destination. When clear, MAINLINE element was called across, followed by HANDBRAKE 06 and 05. The obstacle was crossed without incident and units were on route to FRV 02 by 1408h.

Units arrive near the vicinity of FRV01 at grid 17T NJ 6822 2961. HANDBRAKE establishes a secure perimeter while MAINLINE detaches from the unit with HANDBRAKE 04 and conducts a search for possible OP sites. MAINLINE returns with negative result and no contact. Units depart for FRV02. 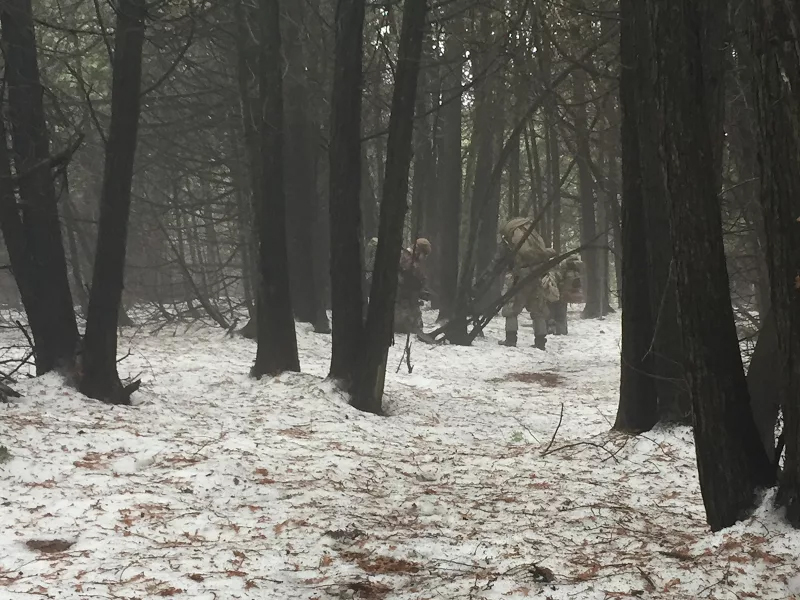 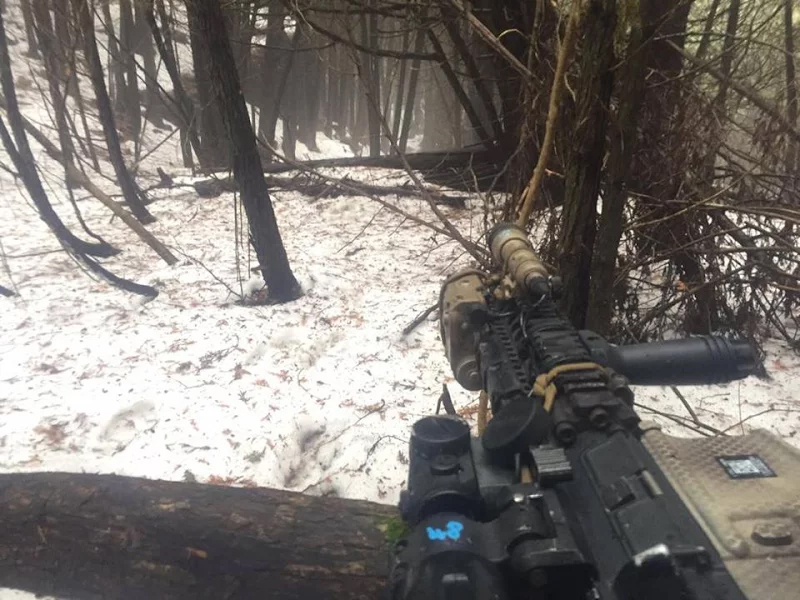 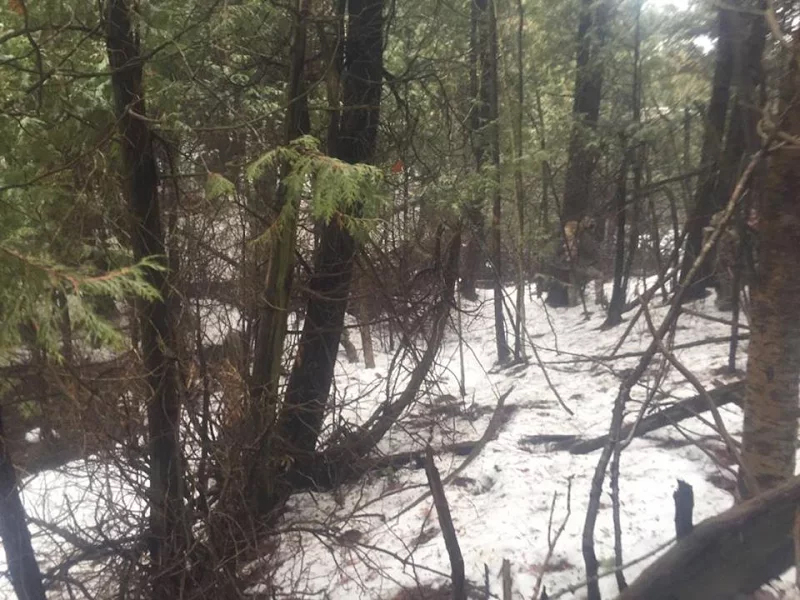 Units arrive near vicinity of FRV02 at grid 17T NJ 6805 2946. Again, HANDBRAKE establishes security while MAINLINE and an individual from HANDBRAKE detach to locate possible hide sites overlooking the objective. The search of the area ends at 1536h with negative results for a hide site and no enemy contact. Elements depart for FRV03. 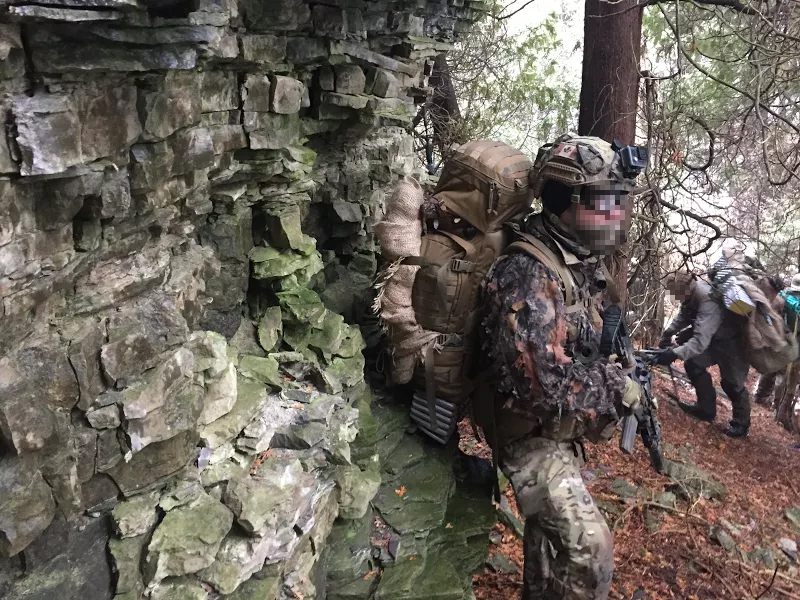 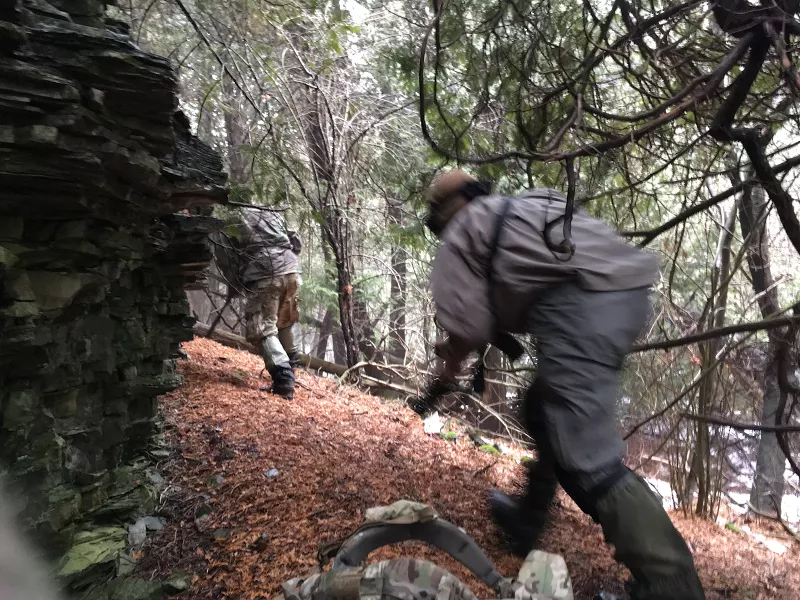 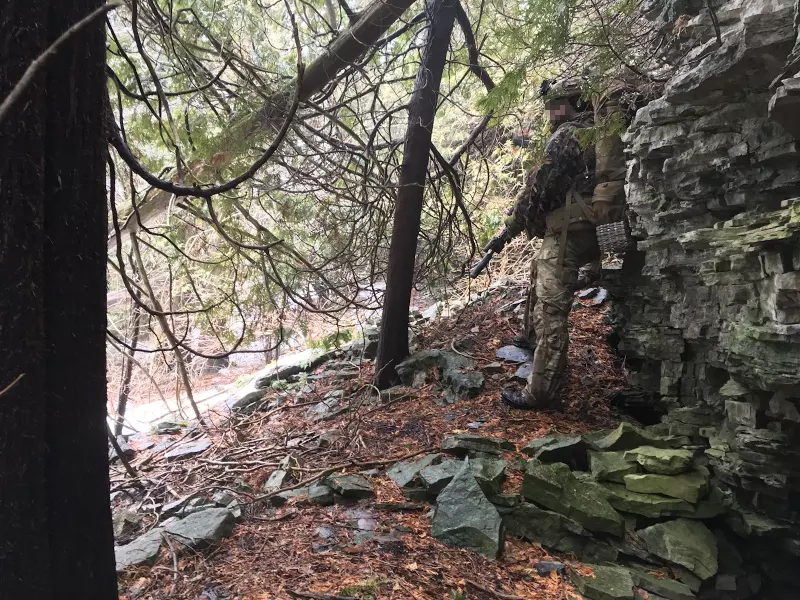 Units arrive near the vicinity of FRV03 at grid 17T NJ 6805 2910. HANDBRAKE and MAINLINE identify several structures and conduct a search of the area for enemy units that ends with a negative result. HANDBRAKE establishes security and MAINLINE detaches with an individual from HANDBRAKE.

Units return with a possible hide location. HANDBRAKE 06 and MAINLINE 06, along with HANDBRAKE 03 move to the site at 17T NJ 6799 2903. The site consists of a flat wooded area bordering farm field at the top of the rise that slopes back towards the other units and separated from them by a boggy marsh. It overlooks a surface route that crosses the objective. The wooded area is dense and contains the remains of farm fencing which would allow sufficient concealment for an OP and an admin area. However, the fog has continued to increase and the objective is barely visible with magnified optics in daylight. It is determined that the site can not reliably observe the objective in darkness and with increasing fog cover.

HANDBRAKE 06 relays this to HANDBRAKE 05 and informs him to direct the unit to hydrate and eat while maintaining security while 06, 03, and MAINLINE 06 investigate other locations along the edge of the farm field. Within the hour, a suitable location is found and the units are brought to the chosen OP site.

HANDBRAKE reports a hide location has been selected and units have begun to create subsurface hides. Hide location is identified as 17T NJ 67926 29265. At this point, semi-regular check-ins begin while construction continues.

HANDBRAKE and MAINLINE begin their primary objective of rail line observation. A team of two individuals is assigned to conduct monitoring while remaining individuals excavate and distribute spoil in the farm field adjacent to the hides.

HANDBRAKE checks in. No traffic and no contact to report. Hide construction continues.

HANDBRAKE checks in, with no contact or traffic reported. Supplies reduced to 70% food and water.

Activities: Hide construction is complete and units have gone into hiding. Observation of the railway is ongoing.

HANDBRAKE sends urgent message. MAINLINE hide has been compromised by an unknown number of enemy units. Two MAINLINE personnel exited the hide to conduct first light checks and were spotted by enemy units. Both suffered from gunshot wounds and were killed outright. A grenade was thrown into the hide by enemy units and resulted in one other KIA. MAINLINE 06 survived the blast, and waited for the enemy to leave the area. Mission abort criteria of compromise and KIAs had been met, and the decision was made to immediately extract to Exfil Point 03 by the most direct route.

During the exfil, HANDBRAKE 05 was separated from the unit. HANDBRAKE 06, 04, and 03, along with MAINLINE 06 moved directly to Exfil Point 03.

OPFOR arrived on-site with no knowledge of the HANDBRAKE or MAINLINE locations or mission. They inserted into the AO at 0500h, and moved past the hide sites without noticing any movement. After stashing their equipment, they proceeded to conduct a grid search of the area seeking any sign of activity.

Near 0730h, OPFOR moved into the hide area, drawn to it by the noise of water falling onto metal debris nearby. It was then that the two MAINLINE elements exited their hide and attracted the attention of OPFOR.

After eliminating the MAINLINE elements, OPFOR moved to an overwatch position for some time prior to observing for more activity. With none found, they exited the area in search of other hides. It was after this point that MAINLINE 05 and the HANDBRAKE elements were able to break from their hides and escape from the AO

The surviving units safely arrive at Exfil Point 03. At the same time, HANDBRAKE 05 makes radio contact after being separated from the unit. They are directed to move to Exfil Point 03 on their own.

HANDBRAKE 05 makes it safely to Exfil Point 03 without contact. 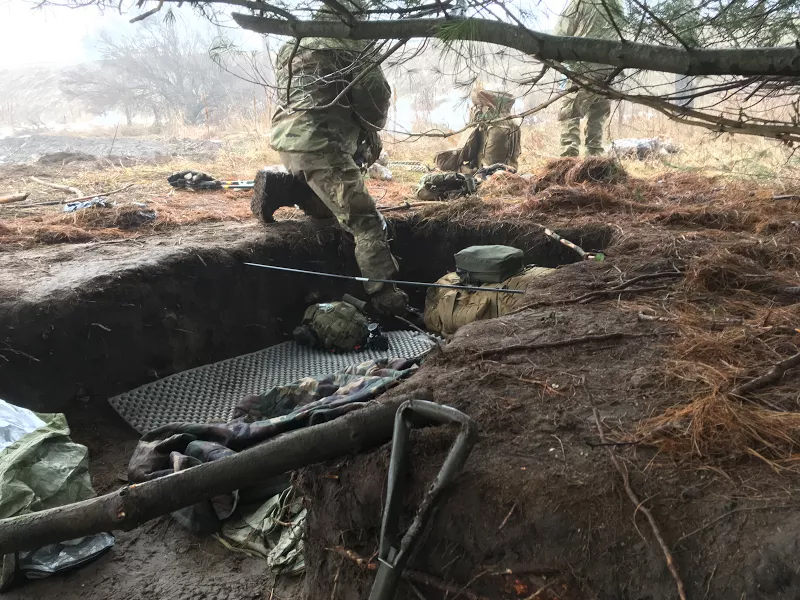 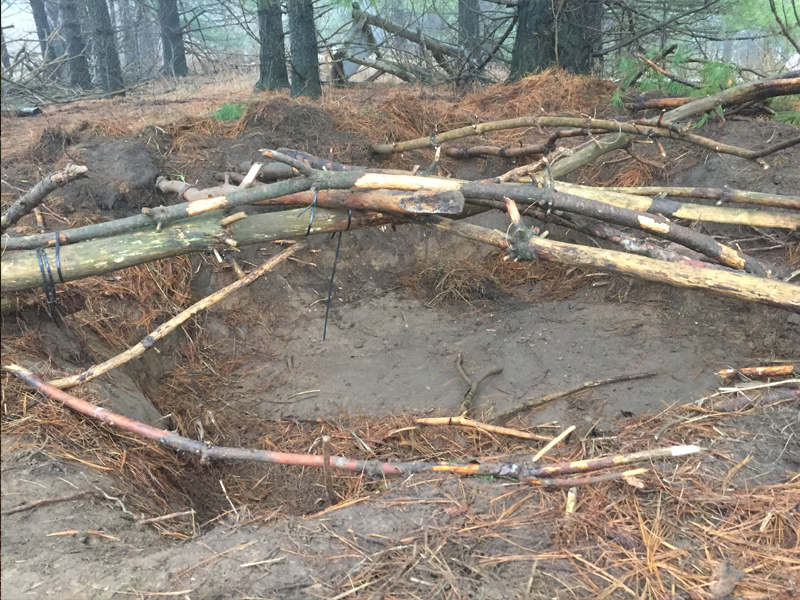 Exercise SHRIKE yielded a number of important lessons for participants.

Security - Security began to lax as the night wore on and teams focused on building their hides. This failure did not have consequences in the training event, but it was an important indication that hard manual tasks can create tunnel vision that obscures possible surrounding threats. In the future, a regular rotation of security will be maintained during hide construction. In addition, security during halts and approaches to danger areas could be improved.

Noise and Light Discipline - Participants were accidentally informed there would be no OPFOR on the field until morning, and as such, much more noise and light was created than it should have been. Ultimately, most participants agreed with that statement even with the use of red lamps taped to minimal apertures. The amount of light used for our work was too much and could’ve been observed. 100% lights out may be required, no matter how challenging that makes the task.

Planning Time Constraints - Unlike previous Blackline Events, a specific stepping off time was created prior to planning. This resulted in a rush to complete some of the more detailed operations that were required. A desire for a day-long or advanced planning session done through Skype was voiced by most participants that recognize the value of this kind of organization.

Communications - The use of Zello was extremely effective in maintaining communications with command. The log of comms allows any unit to go back and check on messages they have missed. However, the process for communicating to command, as well as between the units was less than professional. Designated comms personnel and control conducting regular check-in's would resolve some of these issues.

ATL Roles - In future, ATLs would be required to conduct more management and maintenance tasks, such as updating command and comms with supply and activity status, ensuring units are staying hydrated, etc.

Rest - Often contentious, putting individuals down to sleep is critical. When units are involved in heavy physical activity through the night, it is difficult to maintain alertness when the tasks are completed and long term watches begin. Many individuals fell asleep and as such it prevented our units from maintaining security or observation. In the future, the first watch should be pulled from construction several hours prior to their watch and put down for sleep.

Construction Equipment - Full-sized shovels (or at least trimmed versions) are required for effective digging and are preferred over E-Tools. Per team of 4, the list of equipment should be: 2 x shovels, 1 x folding saw, 1 x hatchet, 8 x sandbags, 100+ feet of paracord, many tent pegs, many bungees, 4 x tarps, enough camouflage nets to cover the hide, chicken wire or prefab roof/door sections.

Elimination of a VBIED Factory - After Action Report 1905a